“We entered sector through ECP-3 with a violent rocking of the Humvees from the unavoidable crater that had conveniently developed in the geographical center of the road. Once out of the wire, we wound through the Iraqi neighborhoods referred to as “Mohalas” by the locals until we broke onto route Swords.  Not more than a quarter mile down the wide Main Supply Route, we descended into what used to be an underpass. The bridge across the top had long since been destroyed, but the pillars were still in place jutting up to the sky from the abrupt depression like unfinished statues. Ever since an IED had detonated on our patrol from between the pillars, I was leery of this particular terrain feature. Every time we approached it, I would hunker down in the turret expecting another blast. Thankfully, there was no surprise explosion this time. I breathed a sigh of relief as we emerged on the other side knowing the worst terrain for attacks was now behind us. The people-clogged markets and congested business district that provided the best cover and concealment for hit-and run insurgent tactics gave way to a straight, flat stretch for several miles.

Complacently zoning out on the strap of the gunner’s seat, a deep crack accompanied by a blinding flash not more than fifty feet away caused me to flinch and crouch low in the turret. I was temporarily rendered useless. The magnitude of the blast stunned me as if I had done a mental dump of all training I had ever received. After several seconds of raw stupidity, I noticed from my peripheral vision that the Platoon Sargent’s truck had been thrown sideways. A door swung open with no discernable movement inside.

“Demon-17 this is Demon-16, over” LT. Kwang’s attempt to establish communications was met with eerie silence.”

This was Baghdad, 2005. Heading towards the infamous Abu Ghraib prison complex, my brothers had been targeted by an epic coward. Although the recent advances in armor had spared the occupants of the platoon sergeant’s gun truck from no more than minor wounds, it was demoralizing to be attacked by an invisible enemy.

Since I was the gunner in the truck directly behind the vehicle that had been hit, I began the sequence of initializing the half-million dollar missile optics in front of me and putting it into surveillance configuration. Having the eyes of the night, it was my sincere hope that I could positively identify the trigger man from a distance compatible with the range of our turret-mounted hardware and we could pound his flesh into mincemeat for daring to attack in such a heinous and cowardly way. But that dream didn’t happen. In short, it hardly ever happened the way we wanted it to in Iraq. Coalition forces would be the ones taking the hit and the initiator would slither into the night or into a canal with enough vegetation to conceal their stinking asses until attack aviation had cleared the area and there was no chance that Americans would stumble upon any form of retribution.

Insurgents were so cowardly it was infuriating. Hiding behind the population of innocent women and children as shields for their utter inferiority, they would employ weapons that were devised from incredible creativity for the express purpose of skirting direct confrontation.

I became starved for blood. Hit, after hit, after cowardly attack drained me of morality in a way which left me with tunnel vision hard-focused on any miniscule chance of a justified bloodletting. I began to daydream about vengeance and re-live attacks spinning them to a different twisted ending until I caught myself slacking in my basic job functions. I began to report in greater and greater detail to my squad leader in hopes that some detail I overlooked would warrant investigation and subsequently snowball into a chaotic firefight at close range. The subconscious world of my dreams slowly morphed from a welcome rejuvenation into an extension of combat operations where my patients and integrity were rewarded with sweet satisfaction of which details were morbidly terminal.

Months passed. Our Area of Operations changed twice as well as numerous adaptations by the insurgents. The learning curve stayed sharp, but one thing that remained consistent was the incredibly debased tactics of the enemy. Deranged animals, abused to the point of constant rage, or notably infected with rabies would directly charge a foot patrol with bare aggression. Those treasured moments, be it animals or not, would trigger an automatic competition. The end result would be a dog with more holes than a Clinton war story lying crumpled where we had ended its brief death sprint. The savagery of it was: we were all smiling. 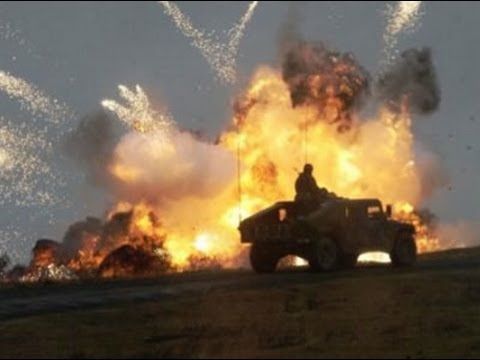 “As I mundanely monitored the convoy’s progress, a piercing flash broke the pitch black of the after-midnight hours illuminating the intersection. Microseconds later, the sharp deep boom of the explosion rocked our ears waking everybody and evoking a controlled race to identify the origin and magnitude of the attack.  Although much of the convoy was in a dead space and was unable to see from our position, I noticed two heads, white hot except for their headwear, cowardly poking above the solid wall that lined the walkway on the second tier of the minaret. They were the obvious initiators of the attack and I wanted to open fire so bad I could already visualize the outcome.

I readied my machine gun as the Platoon Leader gave directives through the platoon net to aid the convoy. We crossed the intersection with itchy trigger fingers and moved into position to defend the stricken convoy. The hit-and-run attack was over, but the sight that met our eyes was nothing short of hideous. The cab-over style eighteen wheeler that had taken the brunt of the blast had rambled seemingly uncontrolled off the road and was now stopped with no visible movement inside. When Staff Sergeant Watts cautiously opened the driver’s side door, one local national lay inside with devastating injuries. A large piece of shrapnel had destroyed the windshield and taken a chunk out of the man’s head so big there was no hope of recovery. Blood, brain matter and cerebral fluid coated the interior of the vehicle’s cab in a hideous concoction that was already attracting flies. The poor bastard was still breathing, but it was only in violent gasps signifying the body’s acknowledgement of imminent death. It was the first time I had witnessed such a graphic expiration. Little did I know, there were many, many more of these scenes to follow in the months of civil unrest. The entire platoon shared what can only be described as a feeling of cold mental darkness. It was evident in the soldier’s behavior”.